Posted on 13 September, 2012 by 1leytonmarshlover 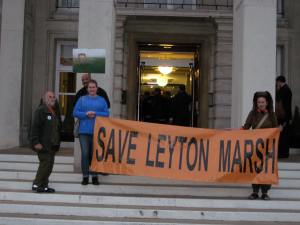 Essentially, despite some very powerful speeches by Celia Corum, Claire Weiss and Abigail Woodman on behalf of Save Leyton Marsh group, the councillors were guided to accept the reinstatement plan without adequate consideration of the issues involved. There was no evidence that any of them had read the reinstatement plan they were voting upon, despite many requests made of the councillors that they consider the nature of the reinstatement properly in order that catastrophic mistakes were not repeated on Leyton Marsh. The petition which had been sent to the Council of nearly 1000 signatures and the number of objections were not even referred to during proceedings.

Cllr. Afzal Akram attended to advise that in this ‘public interest’ case, councillors got the ‘right deal’ and got a ‘correct brief’. There was little evidence that the correct deal was in fact being pursued. Council Officer Ian Ansell only outlined the nature of the turf; this in many ways was irrelevant since the only option possible to return the land to public use in October was the option put forward (big roll turf already grown off-site). Critically, he did not give any indication of the contentious nature of the subsoil selected. When Abigail Woodman twice attempted to make points relating to the inappropriate use of such construction waste (with an incredibly high pH) to form a subsoil layer she was impolitely told to be quiet by the Chair, Peter Barnett.

Cllr. Peter Barnett stated openly that he would not get into the ‘technical details’ of the plan, details which are critical in ensuring the long-term future and biodiversity of our marsh. He proposed that all the technical details were dealt with by the planning officers, despite the fact these details were not future decisions but were included as part of the ODA’s 114 page reinstatement plan, if any of the Councillors had bothered to read it.

Merely two questions were asked by the councillors, some of whom looked visibly bored and were writing notes to each other and looking at their phones. Cllr Karen Bellamy asked if there was any fine related to the ODA not completing the works by the stated deadline of 15th October. Ian Ansell replied that this would be outlined in their agreement with the LVRPA and did not appear to be aware the fine (£250 a day) was less than the ODA paid for daily hire of the site. Cllr. Alan Siggers asked whose job it was to oversee that the job was carried out correctly, to which Ian Ansell replied that this was the ‘dual responsibility’ of WF Council and the LVRPA. It must be pointed out that the LVRPA do not have environmental health officers and that despite the multiple issues related to health and safety during construction, WF Environmental Health were only ever seen on the day of the eviction of the camp. The multiple breaches of planning conditions were never acted upon by Waltham Forest at any point during construction.

The Councillors came to the conclusion that they were merely voting upon the ‘principle’ of restoring the land by 15th October and not the detail. They ignored the detailed plan before them, produced by the ODA after huge lobbying efforts by our group and others. They refused to question why the ODA had begun reinstatement, including the dumping of the construction waste, prior to the plan being approved. Only Councillor Ebony Vincent voted against the plan and after the vote SLM group walked out in disgust, many shouting out crucial points ignored by the Councillors including why the Council did not take seriously the destruction they had sanctioned and its consequential impact on the well being and even health and safety of the community and why they had not even questioned why reinstatement had begun without democratic consent.

Below is a transcript of part of Claire Weiss’ powerful speech:
” • Chair I wish to inform you and the Committee urgently that the Applicant’s contractors have today already started implementing the proposed Reinstatement Plan, prior to your agreement to it. Mass deliveries of infill material have already arrived at Porters Field, even though the nature of it has not yet been approved by this Committee. I urge you to reject this Proposed Reinstatement Plan and seek a report about the reinstatement work already being implemented.
• Chair I am bringing other significant objections to the attention of the Planning Committee as I believe that the Proposal before you is inadequate in coverage. It fails to give you the full background as to why these reinstatement works are so complex. It fails to highlight the massive excavation problems encountered and fails to identify those responsible. The Committee is therefore unable to have a comprehensive grasp of the situation prior to making this important decision about the future of a precious green open space in the borough.”